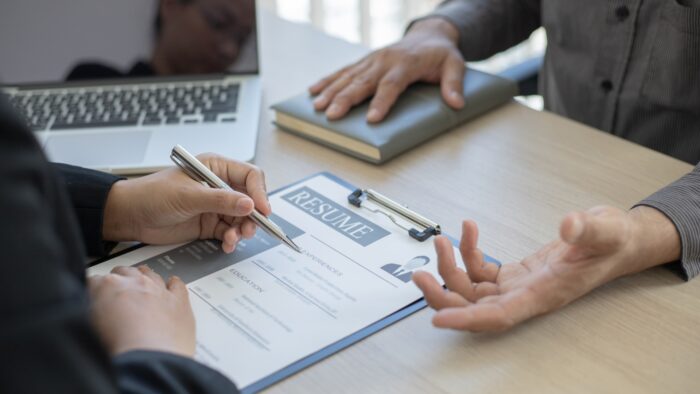 It’s estimated that 78% of people lie on their resumes. Others guess that number is higher. So, if nearly everyone lies on their application…is it really that big of a deal?

In Australia, a woman was put in jail after lying on her resume and using a photo of supermodel Kate Upton to trick an employer into hiring her (and paying her a $185,000 salary). Recently, the British Supreme Court made a man–who faked his PH.D.–give $118,000 in pay back to his deceived employer.

These are extreme cases of resume misconduct. In fact, most hiring managers and recruiters are used to seeing resumés with a touch of creativity–and, while they may proceed with caution, many hiring managers move forward with those candidates anyways.

The same study that found that 78% of people lie on their resumes also reported the breakdown of those lies as follows:

There exists a kind of spectrum when it comes to resume falsehoods and hiring, it seems. It’s not about if a candidate lies, it’s about how.

At one end are the more admissible “enhancements”: stretches of the truth like claiming mastery of a skill they’re only just grasping or listing a project they’ve contributed to minimally.

In these cases, hiring managers and recruiters are more likely to let it slide, recognizing that no candidate will fit all the requirements of an open position–and understanding that a great application shows a candidate’s future potential to grow into the role in addition to their current skills.

At the other end of the spectrum are the hard no’s. Forging an identity, faking a degree, and providing false references are all examples of lies that hiring teams will not tolerate.

In most cases–most critically in industries like healthcare or education that require significant credentialing and up-to-date certifications–it’s not about tolerance, it’s about protecting the safety of your customers and employees. It’s about protecting your brand and your business.

And, these days, protecting your business is all about making smart hires to solve for the long term.

Earlier, on the blog, this series uncovered just how critical it is for employers to speed up hiring cycles in the current employee-friendly labor market (especially with the holidays approaching).

But, while it’s critical to move things along to keep candidates engaged, it’s also more important than ever to make the right hire. Retention is everything, in a tight labor market, and the cost of turnover is shockingly high.

As a result, it’s all about creating a hiring experience that gets candidates through the door quickly so they don’t take another (faster) offer while also screening candidates thoroughly and deliberately to ensure they’ll be a long-term fit for your business.

Right now, it’s essential to be stricter about your “hard no’s” when it comes to resume embellishments. It’s time to be choosier for the long-term health of your business and more intentional about how you build your team–without slowing down.

Figure Out Fact From Fiction

Check back here Wednesday as we go deeper into the behavior of lying on resumes. America Back to Work Returns to the blog and we’re sharing the top three reasons why candidates lie–so you can figure out how to protect your business (and what tools and services can help you do just that).